By Solaris Farms Last updated on March 10, 2021No Comments 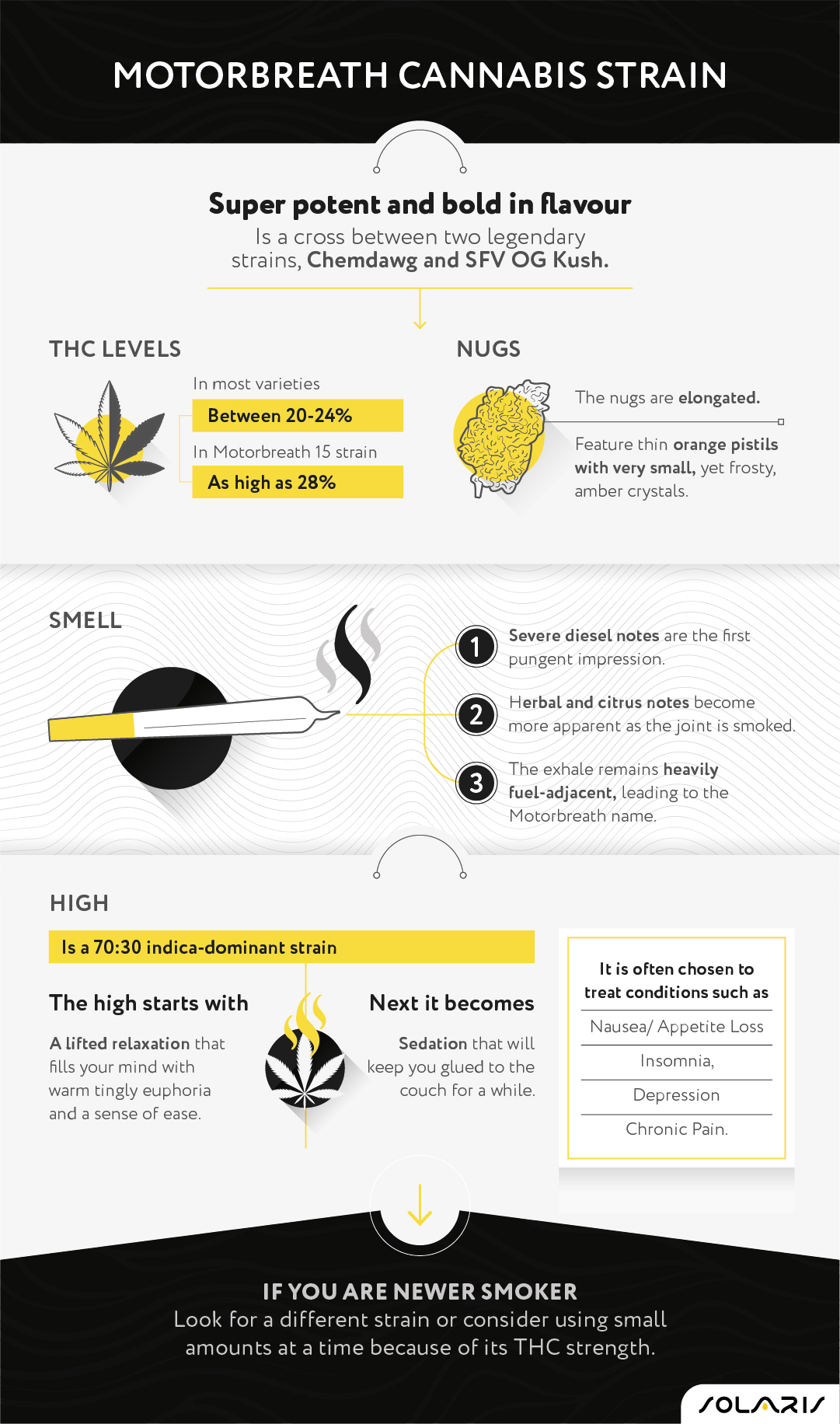 “Motorbreath” is a 1982 classic rock song by Metallica. It is also a strain of cannabis. In a similar manner, the strain of the same name is here to help you have a great time. Motorbreath, said to have been created by the mysterious Pisces Genetics, is a cross between two legendary strains, Chemdawg and SFV OG Kush. Super potent and bold in flavor, it is a strain that is not for the faint of heart.

THC levels can reach as high as 28 percent on the specific Motorbreath 15 strain; however, most Motorbreath varieties test between 20 percent and 24 percent, thusly making it a strain for experienced users with higher tolerances. The nugs are elongated in shape and feature thin orange pistils with very small, yet frosty, amber crystals.

It is a rare strain that is said to flower in about 10 weeks of growing. Motorbreath weed gets its name from its intense smell. Severe diesel notes are the first pungent impression. As buds get smoked, though, herbal and citrus notes become more apparent. The exhale remains heavily fuel-adjacent, leading to the Motorbreath name.

The taste is a little less diesel than the scent, though it is still deeply present. Citrus and earthy tones are much more noticeable on the tongue. The aftertaste is just a hint of herbs and kush. The OG Kush heritage shines through there.

Motorbreath is a 70:30 indica-dominant strain. The high starts with a lifted relaxation that fills your mind with warm tingly euphoria and a sense of ease. Following the initial wave of euphoria comes sedation that will likely keep you glued to the couch for a while. Thanks to these effects, Motorbreath is often chosen to treat conditions such as nausea or appetite loss, insomnia, depression, and chronic pain.

Seeds of Motorbreath are tough to find, as most online retailers are sold out. After all, it did win awards at the 2015 and 2016 THC Championships in the Recreational Hybrid category. If you are able to locate seeds and want to give them a go, consult with an experienced cultivator first.

Just like Metallica, Motorbreath is a strain that comes with an acquired taste. While its sedative effects might be similar to many other indica-dominant plants on the market, the flavors stand out to be very unique.

If you are a newer smoker, you may want to look for a different strain. If you feel up to the challenge just consider using small amounts at a time because of its THC strength. However, if you are experienced and looking for something to test your stoner chops, Motorbreath is certainly worth investigating.